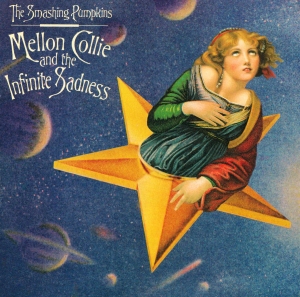 I remember sitting with friends in 1995 and trying to name any “happy” songs. We came up with the Smashing Pumpkins’ “Today.” You know it: “Today is the greatest day I’ve ever known…” But then we learned it was a song about suicidal thoughts.

I remember listening over and over to the Smashing Pumpkins’ album Mellon Collie and the Infinite Sadness. It began with, “The world is a vampire // set to drain.” The whole album seemed to climax with, “Emptiness is loneliness, and loneliness is cleanliness, and cleanliness is godliness, and God is empty just like me.”

I would say that most of music while I was in high school could have been defined as “misery makes for great art.” If you grew up in the ’90’s, you surely agree. Wasn’t it just perfect for dealing with teenage angst?

It’s interesting how things can change with time. If you haven’t yet seen this clip from an interview with Billy Corgan [frontman of the Smashing Pumpkins], you should take 2 minutes and watch.

Some highlights from the interview with Corgan – nearly 20 years after the Mellon Collie and the Infinite Sadness album:

What are you exploring now?

God. God’s the third rail in rock and roll. You’re not supposed to talk about God. I think God’s the great unexplored territory in rock & roll music.

What would you say to Christian rockers, then?

Make better music… I think Jesus would like better bands.

Here’s a better quote: Hey, Christian rock, if you wanna be good, stop copying U2. U2 already did it.

I didn’t expect Billy Corgan to give some of the most interesting commentary on theology that I’ve heard in a while.

1. One of the artists who made the most of misery is now talking about “maturing into the deeper work,” and the “deeper work” is about God.

What happens when you’ve explored misery and existential crisis, and are ready to mature and move into something deeper? Corgan says the natural place to go is to explore God.

A lot of our world wants to promote a sort of nihilism. All misery, no remedy. Just angst. The misery can lead where it led Corgan 20 years ago: “God is empty just like me.” Or it can lead where it’s leading Corgan today – to a deeper exploration of God. Perhaps God isn’t empty after all.

I think we’re seeing here what some have called the “God-shaped hole.” Less generically, I think we’re seeing how deep examination of life may lead us right in God’s direction. It may take us through a valley of despair first. In fact, the depth of that valley may have something to do with the extent of that next exploration: the pursuit of God.

Let me stop here, then, and give you an invitation. If you have been exploring the depths of emptiness, loneliness, and purposelessness, might it be that the only real answer is an exploration of God? Stop here, if this is you. Seriously – I don’t think the rest will apply. And if you’re interested in moving past exploration of misery, I’d love to help point you in same good directions. Those will vary a lot depending on where you are. Maybe we could start with an e-mail conversation?

In art terms, Corgan is calling out Christian music as derivative. They’re taking the template that U2 created, and they’re copying it.

Michael Gungor (a brilliant musician who you must listen to) says the same thing in a different way. He was trying to figure out how he’s so good at the game “Christian or Secular?” — a game where you listen to a few seconds of a song and say whether it’s Christian or secular. He said he realized the difference is that the Christian music doesn’t have a soul. He compares it to a zombie.

What Corgan and Gungor both seem to be saying to many (not all) Christian artists: you have it… but you don’t. There is no greater, deeper, and more profound subject of our art than God. But rather than actually engaging that subject, trying to catch her beauty in a new way, you’re just putting new wrapping on the work someone else has already done. And just as it’s hard to fake a good marinade, it’s hard to fake depth when all you’re doing is repackaging.

The lesson here isn’t just for Christian musicians. I think it goes to all Christians. God has revealed himself and continues to reveal himself. He is worthy of our deepest and most passionate pursuits. And as we explore God, it will radically transform us and thus what we produce.

Pastors — what we need is a church with leaders who have searched the Scriptures deeply and wrestled with the meatiest points of theology and considered how they speak to us and the Church and the culture. We need that much more than we need another Saddleback or Willow Creek imitation. And we should acknowledge that the imitators never really emulate the “success” of the originators. The wrapping may be similar, but the depth gained in getting there isn’t.

Now I’m not saying that technical, how-to help has no place. If you have something profound to say but haven’t learned how to communicate, it won’t have much effect. Sure, read an occasional how-to book and go to an occasional how-to conference. But read more Augustine and Calvin and Wesley and Barth and Bonhoeffer — oh, and more of the Bible!

Not shunning the past

Some people go the other direction with this. Billy Corgan tells Christian musicians to stop copying U2, so perhaps we should just trash anything that’s old and come up with our own, better, newer things. But I don’t think Billy Corgan is uninterested in those who have gone before him. Ask him, and I expect he would speak glowingly of Black Sabbath, Jimi Hendrix, and Cheap Trick. I doubt I would have listened to his music if all he did was play Jimi Hendrix covers, though.

New explorations aren’t about shunning the past. I presume that some of the world’s greatest artists and musicians and even athletes have been among the greatest historians of their trade. They have been deeply formed by watching, admiring, and learning from those who came before them. And out of that depth they have done something that reflects the past without mimicking it.