Me trying to establish some credibility

I need to start this by assuring you that I care about finding creative ways to share the gospel, opening up new conversations about my faith with people, being a “grace-bearer” to others.

I’ve tried in several ways to act on that. A few years ago I started meeting weekly with a group of men––especially focused on several who referred to themselves as “church dropouts”––to talk about the Bible, theology, and the state of our souls. This year my family moved to Spain to help with the start of a new church that is trying and praying hard to share the gospel.

I share that because I think several people view what I’ll say below as a refusal to be creative or an apathy about sharing the gospel.

Me fighting for the sanctity of sacred things

How do you feel about drive-up weddings?

You have the bride, the groom, the vows about undying love, and the piece of paper that makes them official. Isn’t that ultimately what a wedding is about?

But something seems missing, doesn’t it?

Because a wedding is actually more than that. It’s not just about the bride and groom and the piece of paper. It’s also about the community of family and friends who come to witness and bless their marriage. It’s also about that larger liturgy––prayers of blessing over the couple, exhortations and encouragement from Scripture, and (at its best) receiving Holy Communion with family and friends as the first marital act.

The drive-up wedding misses all that. In the process, a sacred communal act gets watered down. It loses that corporate element and makes the wedding entirely about the couple (and the person at the drive-up window, I suppose). It loses the wedding liturgy, which frames the act of marriage within a larger context of prayer and Scripture and communion. 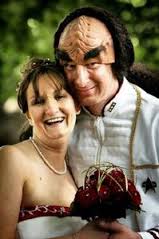 The utilitarian says the bride and groom are married at the end of the day, regardless of the details. And (s)he’s right. I add, though, that the wedding ceremony is a not-insignificant rite that launches the couple into marriage. And the drive-up married couple has begun their marriage with a sadly watered-down understanding of marriage.

Now marriage doesn’t belong just to the Church. You can get married dressed as Klingons and get a “live long and prosper” benediction from your officiant, Spock. So I’m not going to fight against its watering down. That’s outside my purview (except for Christian weddings, which I hope we’ll keep sacred).

But I’m alarmed at the ways I see Christian leaders watering down the rites of the Church, in the name of outreach.

A popular youth ministry speaker used to speak with great passion about sharing the gospel with teenagers. He spoke with equal disdain for people who questioned the appropriateness of some of his tactics. I could nearly imagine him saying, “We used the communion elements for a food fight in the sanctuary, then a teenager gave his life to Christ… And would you know that our church council scolded me rather than throwing a party?!?”

He never said that––but he wasn’t far from it.

I commend that speaker for his passion for youth to know Christ. But I was somewhere between frustrated and appalled by his disregard for anything sacred. Yes, he was bringing teenagers into the great Body of Christ. But he was desecrating the things of the Body in the process.

[My disclaimer: some church rules are just silly. And we can get so worked-up over our “nice things” that we find no place for certain people in our buildings because they might get the carpet dirty. We need to re-examine our priorities in these cases.]

Yesterday was Ash Wednesday, and I’ve seen several news articles and Facebook mentions about “ashes to go,” “drive-thru ashings,” and “ashes on the street.” I commend the people who did those things. They’re being creative, thinking about how to reach the “person on the street,” and surely starting some good conversations. Good people, good intentions, probably some good results.

But I wish they hadn’t done what they did. I commend them for a well-intended act, but I disapprove of the act itself.

When I shared that with a friend, he responded, “It would be great if uninterested people would come sit in a service for their first time but it isn’t reality. I guarantee offering ashes and prayer at a mall planted seeds in hearts that a service invite might not have and possibly opened a door to further conversation with people.”

I suspect that a growing number of church leaders are thinking like that today. I commend their desire to reach out, but I wish they didn’t use a drive-up wedding approach to do it.

The ashes of Ash Wednesday aren’t just about the individual and the ashes. They’re about a community that comes together in prayer and confession. They’re given context by Scriptures that speak of our mortality and urge us to be reconciled to God. When we do drive-by ashings, we miss all of that.

I don’t doubt that practices like this can spark great new conversations, perhaps even bring new people to faith. Even yet, I wonder if we should be doing them. Can we bring people into the beauty of the Church without watering down its beautiful rites in the process?

We can plant seeds and open conversations by handing out wafers and juice at a mall, or doing baptisms in the mall fountain. Still, we might ask whether that means it’s the best thing to do. Do the ends justify any means?

Am I discouraging the Church from being “relevant”? I hope not. In their proper context, our most sacred rites are incredibly relevant. If the world won’t participate in the full, sacred rites, though, let’s not give them the drive-up wedding version. Let’s instead find other ways to be relevant to them, while inviting them into the larger life of the Church.

9 thoughts on “Reaching out without watering down”