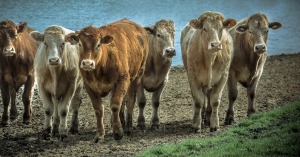 Last Sunday, I began a preaching series on Old Testament ethics with a sermon titled “The earth matters.” How do we understand our relationship to God’s creation and creatures? You can find the sermon audio here.

A main part of that message was on humane treatment of animals. This isn’t just humane activity. It’s divine. It’s acting as the living image of God, God’s representatives on the earth. It’s caring for God’s creation and the creatures of the earth as the good gift that they are––not to be abused or disregarded. We especially focused on the living and dying conditions of most of America’s “food animals.”

A little secret I let my congregation in on: the preacher doesn’t already have all these things worked out. My family is no exemplar of care for God’s good earth and its creatures. This isn’t to say we do anything intentionally abusive or negligent, but we’ve just not given it much attention. Whether this sermon convicted anyone else, it at least convicted the preacher.

I thought I’d share with you some practical tools we’re finding to do better. These are all resources to help us buy from places with an eye toward humane treatment of animals, rather than from factory farms. For what it’s worth, in addition to the benefit to the animals, these practices may also include health benefits, environmental benefits, benefits to farmers, and provide better-tasting food.

There are so many things to think about, and wholesale change can be difficult. Not to mention that many of these new choices will be more expensive. For those who are just trying to take baby steps, I’ve talked to some people who have decided to focus on switching one meat meal per week to a free-range/grass-fed/organic option. Others have talked about reducing the amount of meat they eat per week, and still others about starting with a move to organic or free-range eggs.

Sadly, the environment has become a political hot button issue. The mere mention of the word is likely to get our backs up about as quickly as words like gun control, abortion, same-sex marriage or immigration. If you find yourself in lock-step agreement with a certain political party on all of these social/ethical issues, you might pause for some reflection. None of our political parties (so far as I know) are seeking first to govern according to the will of God. They have many other agendas. Donors, pressure groups and philosophical commitments all influence their social agendas far more than a deep reading of the Christian faith.

Some people want us to avoid these topics in the church for the sake of “keeping politics out of church.” But more than American political issues, these are ethical issues. The church must speak and act on these things, and we need to be able to do it without the suspicion that we’re doing something as small as promoting a political party’s agenda. Our task is different, and bigger, than any of theirs.

7 thoughts on “How Should We Then Eat?”