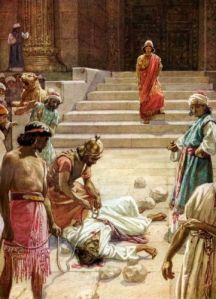 What if we judged the prophets of the Bible based on their results?

Most would be considered miserable failures.

The general story goes like this… The prophets went to a people who had rebelled against God – committing idolatry and/or neglecting and oppressing the poor – and called them to repentance. They told them that destruction was coming if they didn’t repent. The people scoffed at them. And then, in several cases, they killed them (see 2 Chronicles 24:20-22, 36:15-16, or Jeremiah 26:20-23 for some examples). Then the people went back to their idolatry and oppression and neglect of the poor.

Pragmatists today would look at the prophets and say they wasted a lot of time. Or had bad strategies.

Perhaps they should have spent more time working on PR and networking. Maybe they should have had a gentler approach. If they hadn’t burned so many bridges (and gotten killed) for speaking up so strongly, they might have been able to achieve a bit more progress over time – maybe not a full turn from idolatry, but at least a few Asherah poles cut down.

See the Facebook Page linked at right? Click “like” to get updates for more articles. I don’t promise you’ll agree, but I think they’ll at least by thought-provoking.

The consistent cry of the pragmatist is to only do what works. And (though it’s rarely stated outright) to be willing to compromise the real message and impulse of Christianity just enough to make it acceptable in our culture.

That music director who is living in sin, but who draws a large crowd each Sunday? Let’s not do anything too drastic. People may be coming to Christ through her work.

The biggest giver in the church is having an inappropriate extramarital relationship? Let’s not confront this too directly and face losing him. Just think of all the ministry that’s taking place because of his giving.

No, a new creation economy surely wouldn’t have our top-level people being compensated at five times the lowest-paid. But that’s the way it works, and we’re not going to be able to change it.

There may be a general question about compromising a bit of holiness to gain the appearance of more relevance.

You get the picture…

The Difference between the Prophet and the Pragmatist

At root, there is a single difference between the prophet and the pragmatist. They have different goals.

And both of their goals are good goals. But I believe one is far better.

The goal of the prophet: be faithful to God. The prophet is sent by God to address sin, injustice, and heresy, wherever they may be found. Now certainly there’s some discretion about how to do this. Look at the various methods of the prophets. Isaiah walked around Israel naked and barefoot for three years (Isa 20:3). Hosea married a prostitute. There are times that they hide and wait and other times that they go boldly. But the message of God is never compromised, even if they may have achieved better results otherwise.

While I believe both prophet and pragmatist aim at something good, I believe the prophet’s goal is far better and more appropriate. Paul said, “Neither the one who plants nor the one who waters is anything, but only God, who makes things grow” (1 Cor 3:7).

We don’t make things grow! God does. We plant and water. And I think it’s best that we plant and water with only the purest seed and purest water. We faithfully do as God calls and leave the results to God. Anything else confuses our role in the process.

So to put it plainly, I believe full faithfulness to God is more important than anything else. Even than evangelizing and converting more people. Even than eliminating more injustice. Even than preserving the church for its future work.

Ask a pragmatist, and it will be hard for them to say the prophets were “successful.” At the least, they’ll have to skew their definition of success for the prophet, then refuse to hold that some definition for their own work. Oddly, the most successful prophet, by pragmatic standards, was probably the least faithful of all the prophets: Jonah. Whatever it presents, I don’t think the account of Jonah is trying to persuade us to be like him.

The questions that will come

Some valid questions will come back, and I don’t want to take the space to answer them now. Perhaps later or in the comments. The challenges and questions I expect:

– “Great. Make it all about faithfulness to God and not results. Sounds like an easy way out when you don’t achieve any results.”

– “The prophets were sent by a clear word from God. You can hold to their standards when you hear an audible word from God as clearly as they did.”

– “Paul became all things to all people so that by all possible means he might save some. Sure sounds pragmatic to me…”

These are all legitimate. “Faithfulness to God” has been used for all sorts of laziness, personal agendas, and outright evils throughout history. What I’m trying to combat is perhaps a bit more plain – those situations where someone says, “Well that’s true/right/better, but it just won’t produce results.”

6 thoughts on “Prophets and Pragmatism”